Bored of the Playsystem 2 almost always being the right choice over the Gamesphere? Want to play a game where it was the TES that flopped? What would it be like if mature gamers flocked to the Gameling? This mod for Game Dev Tycoon randomises the success or failure of different consoles within the game. It can be configured to affect multiple aspects of a console’s success including it’s sales, lifespan, and what kind of audience it manages to attract. 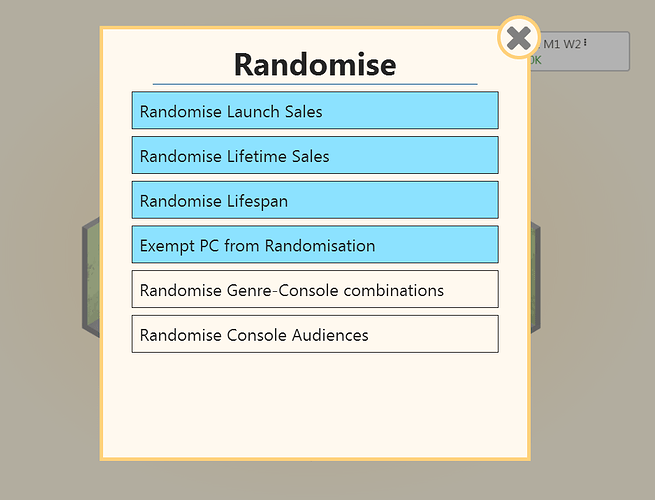 The version number is 0.0.4 for a reason. While it will randomise your consoles, expect everything to be potentially broken. I’d advise not loading any important save files with the mod loaded, and instead disable the mod, restart the game, and then load your important save files. With that said, here you go:

It is recommended that you leave the option to exempt PC enabled, to prevent the (admittedly rare) situation where you are left with no platforms to develop for.

If you start a new game with the Randomiser, then I strongly suggest you skip the tutorial because the event to start the randomiser cannot happen before the tutorial completes, which could be a while into the game.

The randomiser should work with other mods which add new platforms, however compatibility is not guaranteed. When the mod is more complete, I will focus more on compatibility.

Will probably be LGPL when I make my mind up.

At the moment though, all rights reserved, except:
(a) for those granted to Green Heart Games through the modding agreement.
(b) You may include this in any modpack, provided you link to this thread in your modpack’s description.

I think this should be called Platform Randomizer, not console randomizer.

It’s actually called that in the code

But for the meantime, since the PC is exempt and disabling that is not a good idea (it could leave you with no platforms to develop for), it’s just consoles. When I change it to make sure there’s multiple concurrent platforms, I’ll change the name here.

Sounds pretty interesting. Even better would be if you could influence the success of a platform by developing successful games for that platform.
Dunno how complicated that would be exactly but shouldn’t be thaaat hard to achieve I guess.

It’s probably doable by introducing a new marketKeyPoint at the point that the successful game launches, and then multiplying all the future key points/final sales by a modifier. I might do it when I have this finished, but something like that could be useful even without randomisation so might put it in a seperate mod.

What about randomized platform names also?

And resurface them again. But perhaps with other technology and so on.

That by default would make it unlimited playable mod that never is the same on each playthrough.

Great mod. What about next version?

0.0.3 has been uploaded which fixed a bug if you tried to start a new game without having previously run the Randomiser on 0.0.2.

As for the 0.1 which will be the next added features (probably just dynamically generating events based on console success/failure), that will be when I get less busy with college, which might be another week or two.

I received the following errors with your latest version;

Zipped the wrong folder on my end, reuploaded. Sorry about that.

I downloaded it again from the link in your top post and am still getting errors with a new game.

So, does this mod work? I have always wanted a mod or update like this, but, can I suggest something? What about if a random console is chosen to replace the PC? So, like the Govodore 64 beats PC or if the TES becomes the awesome console of yesturday.

Ok, when you extract it, do you have:

Atm, either my installation instructions are wrong, or the zip file I uploaded is wrong, because I can get it working on a fresh install, but others can’t.

Ok, I’ve figured out how to completely reset my Game Dev Tycoon to its first run (disabling steam cloud and removing the save data from Steam’s userdata folder), and tried with the latest download, and found what I think might be the issue that Charlie was having with the reupload. I’ve deleted the files for 0.0.2 and 0.0.3 because they actually wouldn’t work on a copy of the game where you hadn’t previously run 0.0.1 because they assumed some data would be present that wasn’t actually.

Hopefully I’ve fixed it this time, sorry for all the hassle.

Does it affect consoles from other mods?

I haven’t tried it yet though, and depending on what the other mods do, it might have weird side effects, so it’s not officially supported.