My High Score on first playthrough

with Game End after 30 years.
Now restart with 35 Years of playtime

I had 1 AAA title in my final score, and another that finished production around 2 weeks after the end of the game. My ending score was a little over 54mil 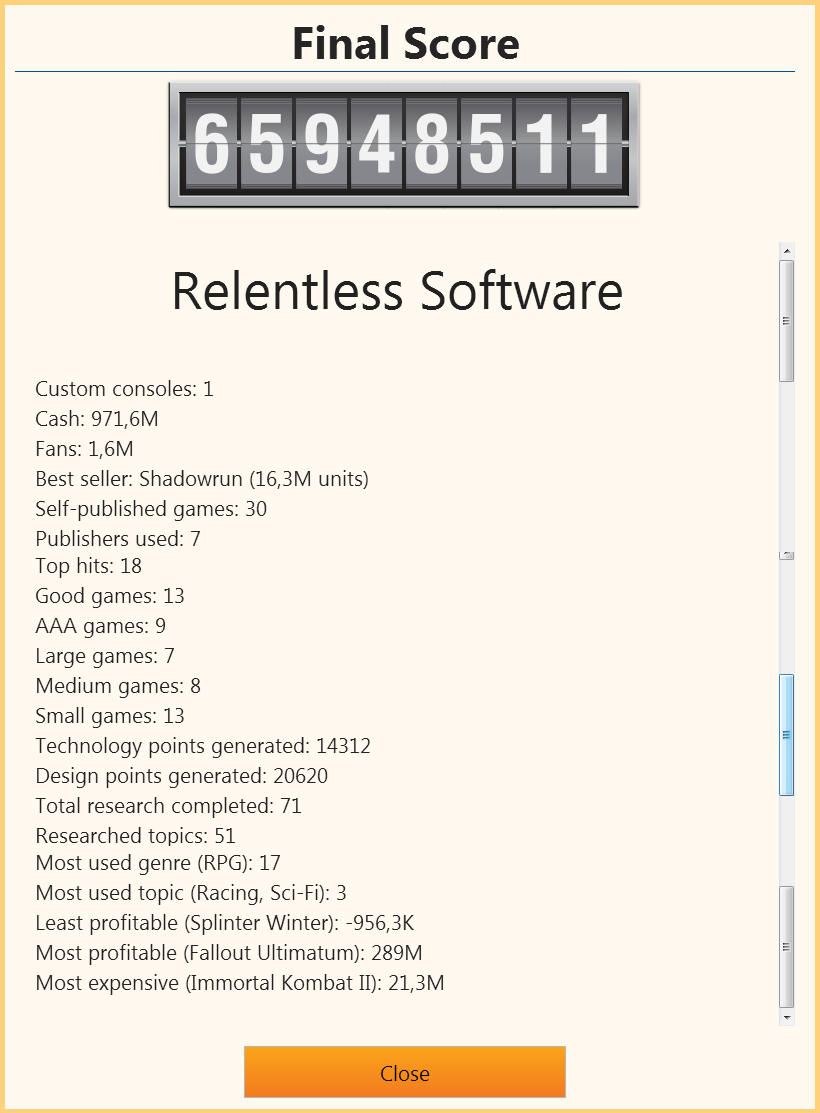 Going to try again with an action gaming focus and aim for a console out for each of 3D5, 3D6 and 3D7. 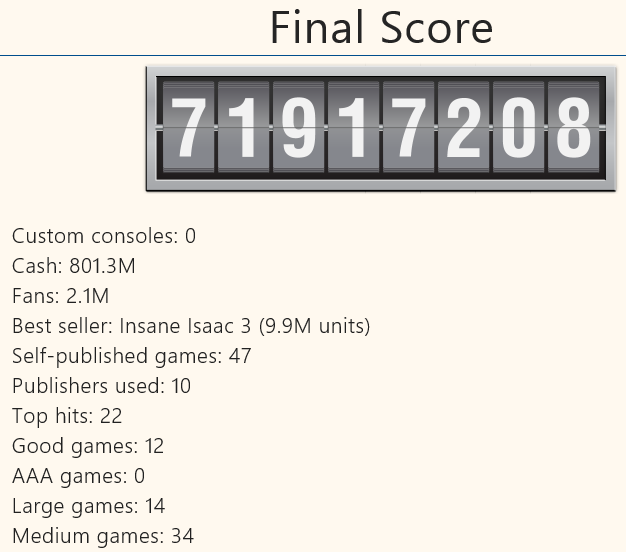 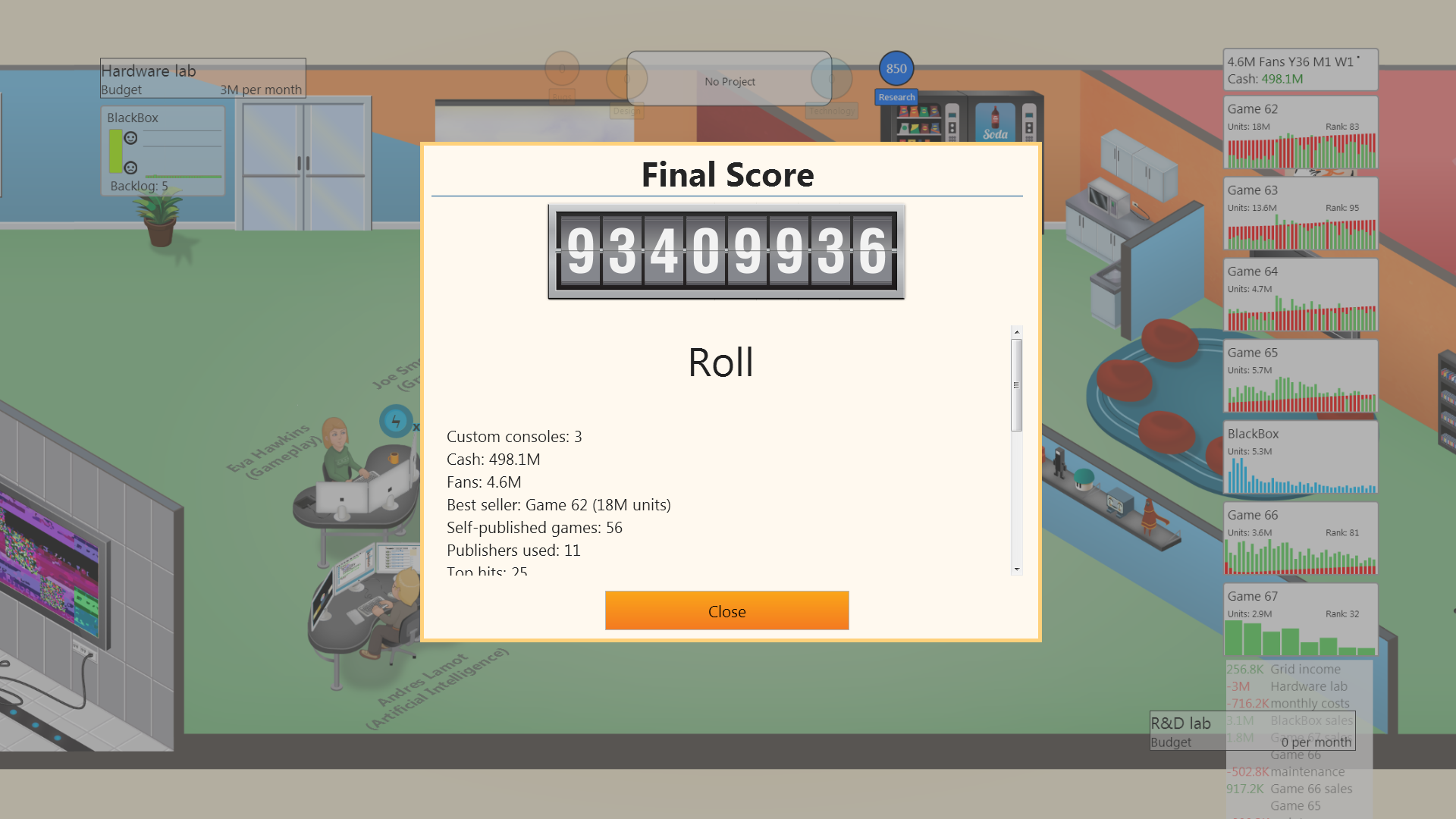 And my latest one (THIS im proud of

Please note: i dont have the final score just the highscore… becuae once you go past 99 mil points the counter resets so it said 10 mil points but in the highscore it showed 110mil =3 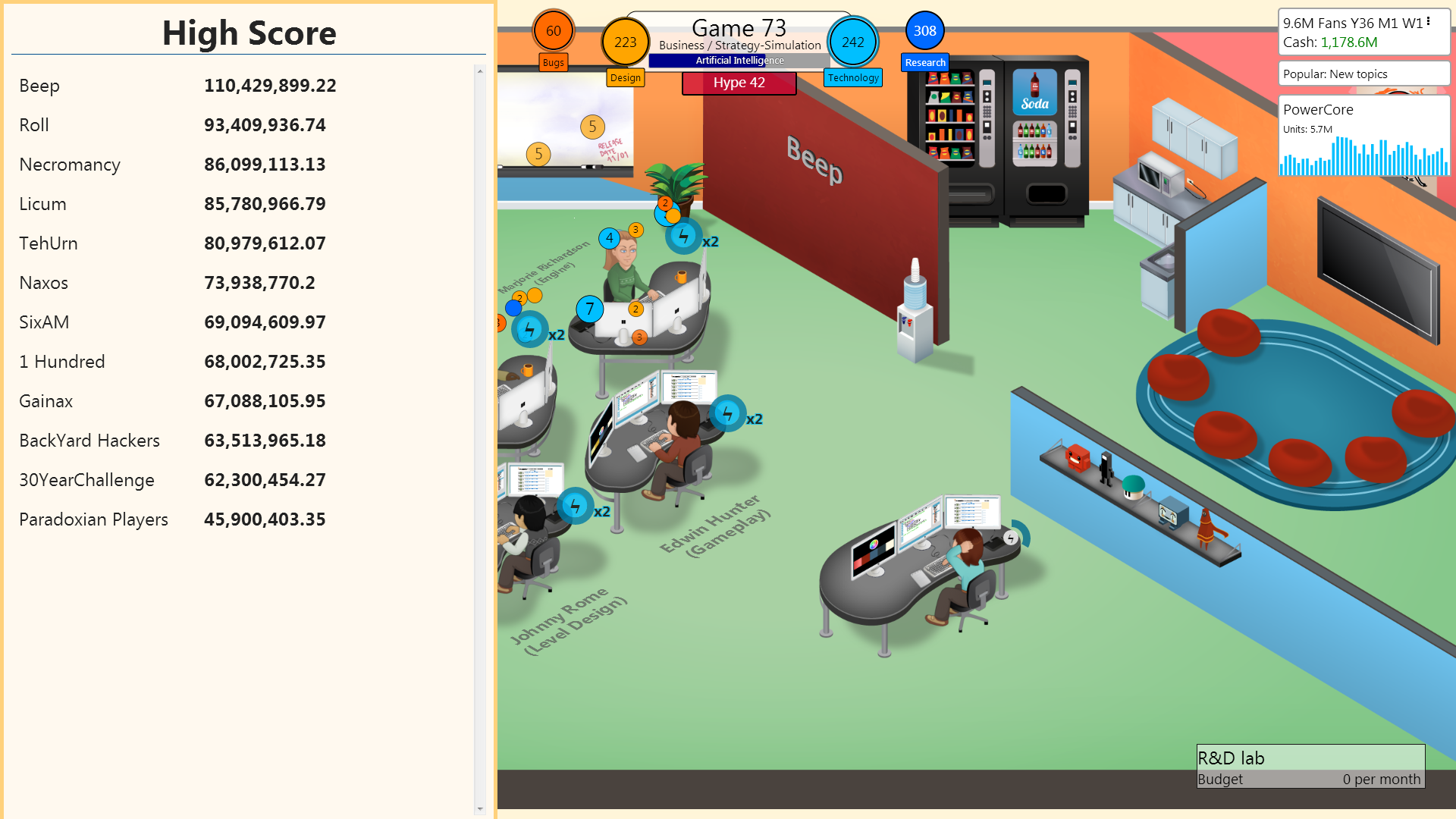 It is amazing how great some of you have done. I thought I was doing good to just get this. I didn’t use any MMO’s, so I feel a little bit better off than some players. 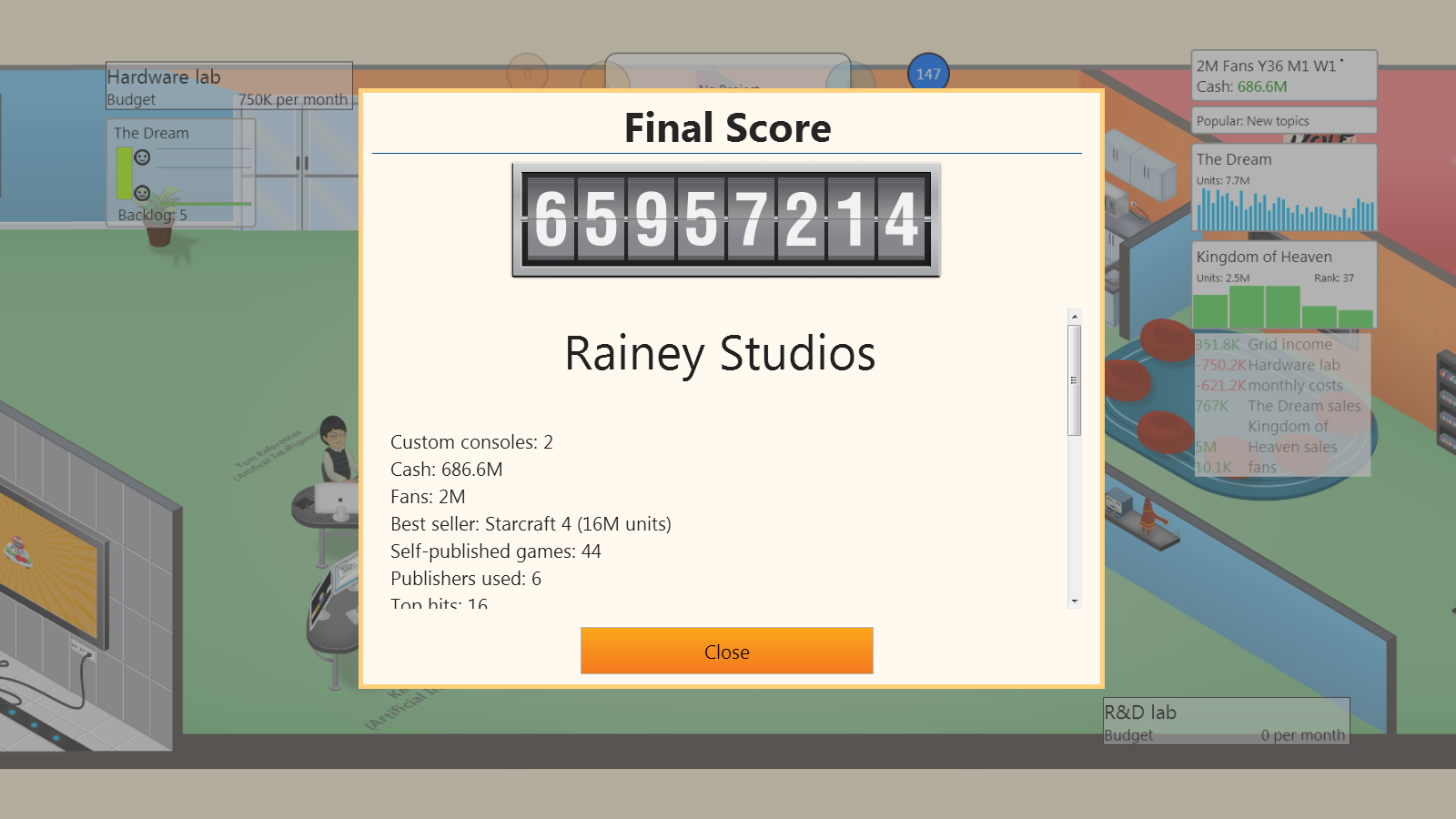 Having the same problem as @Matt, the counter needs an additional digit. Also, new high score 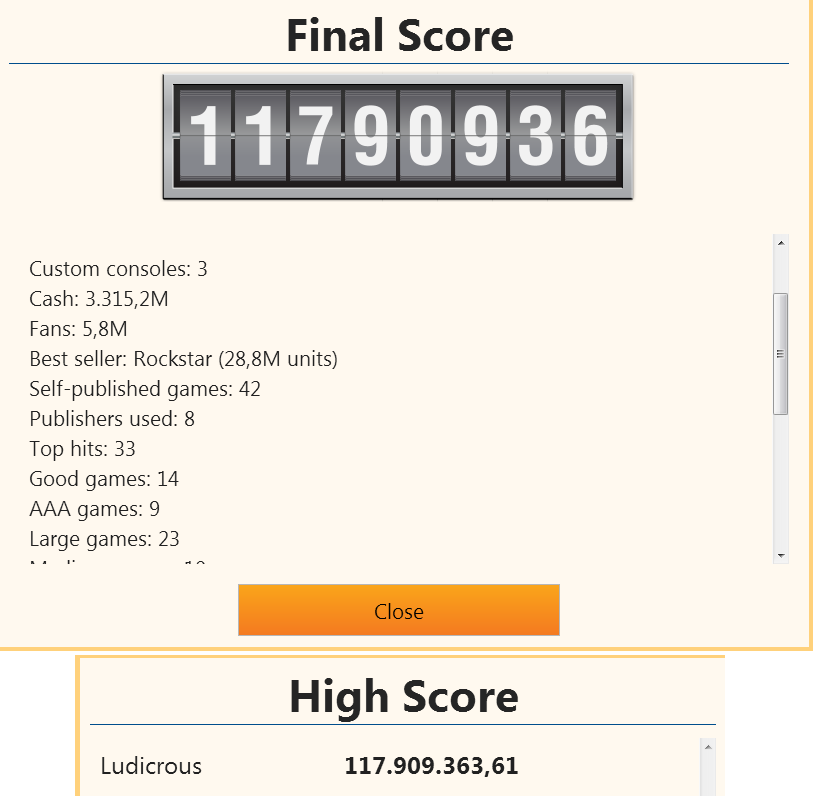 Edit: Forgot to mention, this was in a 30 year game with a “no MMO and no meaningless console upgrades” house rule

117+ without MMO? That almost seems impossible. I guess you are just an expert at the game.

My first 35 year game. Was barely finishing my first MMO in Month 11/12 of year 35. Was on my second console and just started having option to research 3D Graphics v6.

I planned out my staff from the start to be “good at Action games” but I still ended up too Design heavy and did a lot of multi-genre games throughout. Only my last 4 games were AAA and the highest rated was a 9. 9.75 on a large game… sci-fi sim / adventure. 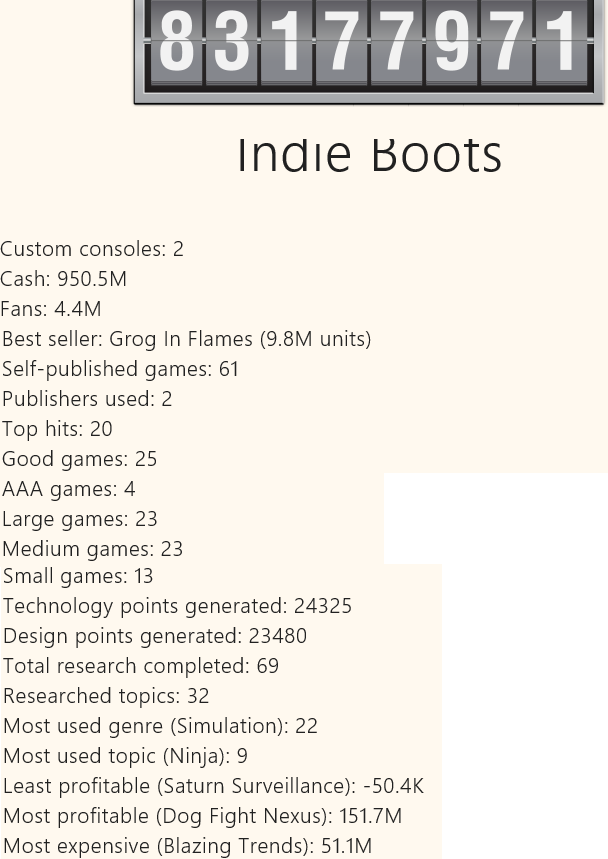 Ultima Underworld was a latish game (published Y28M10W4) large publishing contract aiming for 100 million. Fell short as a 9.5 and probably went too early with it, but after that no more publishing contracts for good combos on open platforms came up (obviously you want to avoid developing for anything but your own console once you corner the console market).

I think “unobtainium” (100 million copies sold without a publisher) could only be done with a many expansions MMO, as my last published game was a 140% AAA on nearly 700 hype that posted 9.75 and only sold 23 million units with a 6 million fan base. I might do an MMO game next. I did not use MMOs in this game.

Ended with 10.4 billion in the bank though… and confirmed that unobtainium cant be done with an MMO, because my sales were in the hundreds of millions by the end.

Reduction to 2 consoles and refined spreadsheet gave 12 good games and 41 top hits from 53 games made. Actually got out of the garage with game 6, which was a new fastest ever.

Does anyone have unobtainium? Is it even possible to get?

No MMOs as usual.

I lost it in the mid game… none of the medium titles were smashes (7 publisher and two self pub for one 9.0 and nothing higher). I actually went broke and had to restart the middle level the first time from the same problem after pushing too hard with my engines.

Might try an RPG focus for my next late game, perhaps it gives a little more room for scaling… last and 3rd last games only posted 9s because there was no room left to move.