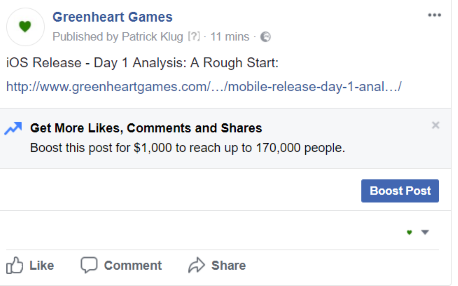 I wanted to let you know since I saw it mentioned in the article that I did not open the previous email because the subject line said everything I needed to know.

So far, barring that one email I have read everything you guys sent me. Perhaps reconsider the over description in the subject line (looking back at past subjects I see every other one as something I would click on).

Honestly, if it’d get released on another platform I owned and played games on, I would double dip, since I really love the game. But I don’t own an iPhone and I never game on my android device, I purchase dedicated gaming devices for a reason. So go for the Switch port and it’s a day one purchase for me:)

Thank you for your input. I’m sorry if it seemed like I was complaining about our readers. That’s definitely not what I meant. I totally understand that not every email needs to be opened and not everything is of interest. I was just trying to state the facts of the first day.

I would 100% buy a switch version of this game. I know it’s not easy to make these ports. But put me down for day one purchase for switch as well!

Glad to see you awesome guys getting this out on iOS. I will be purchasing the Android version when it is out. If for no other reason than to support you!

Interesting thing: link from the email works but the game can’t be found on the AppStore directly. Same issue yesterday and today. When I type Game Dev in search I got some guide to the game and some different games but not Game Dev Tycoon.
Thought you may want to know that the search engine doesn’t work for all the people. Cheers.

Now that we went through all that effort to rewrite the game for mobile, we might just look into the possibility of a Switch port. Make sure to sign up to our newsletter just in case:

Oh, Thank you for the support! Though if you want to claim your free Steam key from your earlier off-steam purchase of the Desktop version just write to support@greenheartgames.com and we’ll resend it to you!

How do you think I got here in the first place?

I really liked your candid post about your first day of sales. I found out about Game Dev Tycoon when you got all the press about the leaked pirated version. I bought it on Steam and am interested in getting it on my phone – which is actually a big deal for me. I don’t play mobile games really. I currently have no games on my phone, and have only ever really had Fallout Shelter and Jurassic Park Builder (and those are because I enjoy those properties).

I will say, when I first got the email I didn’t click the link, but I searched for the game and couldn’t find it. I found Game Dev Story and the like but that’s it. Even this morning when I search for Game Dev Tycoon, Game Dev Story comes up first.
All that being said, you are currently on my Wish list, because I need something to tell my wife to get me for Christmas, ha ha.

Keep up the good work!

I bought your game when I first heard about the piracy joke version online. I was just beginning to get into computer science and hoping to get into the game development space (still working on that). I loved the game and have played it quite a bit on Steam as well. I also appreciate your honesty with the sales analysis and am more than willing to give feedback.

In regard to the iOS release, I’m curious to know how much effort went into making for a great mobile launch beyond developing a great game. I didn’t know GDT was going to iOS until I got the email the day of. I am interested to play it on mobile, not just for the convenience but also for the new game mode. I have not purchased it yet for a few reasons, however.

I want to say more, but I’ve gotta go for now. Thanks again for the emails and post. I may buy the game on iOS after payday anyway.

That’s entirely true. We don’t want to hold our existing fans hostage so we don’t force you to buy it on mobile by having some exclusive content that you won’t get on PC. The PC update will come post Android release (and as a Beta in a few weeks). You don’t need to buy the mobile version but if you want the convenience of playing it on mobile, give it a go

As someone who does analytics for a major brand and has to work in a veil of secrecy, I am blown away and humbled by this transparency. It makes sense that mobile adoption would be low… My suggestion - boast the fact that the game works offline… Seriously… It does right? Please tell me it does, I’m on Android now so I can’t check till you guys release. I stick to bejeweled 2 (classic?) and Soliterica because of those reasons, and so do many other commuters here in NYC as signal is still only available at stations underground… I know… niche market but a breath of fresh air compared to always online stuff that has no right to be always online.

I know that maybe all of this is useless, but if you want a fresh eye of a data analyst on your stuff let me know, I will gladly donate time.

That’s so nice of you, I’ll keep it in mind! - I had a friend who works in data analytics also offer some help which is great

Sorry if that came across as negative in any way. I was just trying to offer my personal experience as a tool to help you. I love Greenheart Games and you guys have never given me a reason to doubt you.

I read your newsletter and then read your day 1 analysis. As an indie game dev, who spent 200k twice launching games to iOS with little return, i appreciate the openness and data you shared so all of us can learn from your difficulty and mistakes.

In regards to “why”, I offer the following opinion because it is obvious to me as an outsider and probably harder to see as an insider:

I offer the above to help as you sit at your desk wondering “what happened?!” Game dev is a cruel mistress (your game represents it far too easy!

). We make mistakes and hopefully learn from them. Hopefully they aren’t fatal. I don’t suspect this port has been fatal to you, just a good solid slap you’ll remember the sting of for years to come and when you look to port your next title to mobile.

PS (try to have your mobile version within 6 months of your PC release, duplicate sales are far more likely. I played your game in the backseat of a minivan on a road trip on a laptop. If I had the tablet option at the time i probably would have bought it purely for the accessibility and battery life)

I read your email and sadly I’m on android and I will buy it as soon as it launches! Also as someone said a switch port would be cool but will probably cost more than it brings in.