I am the Secret Keeper! 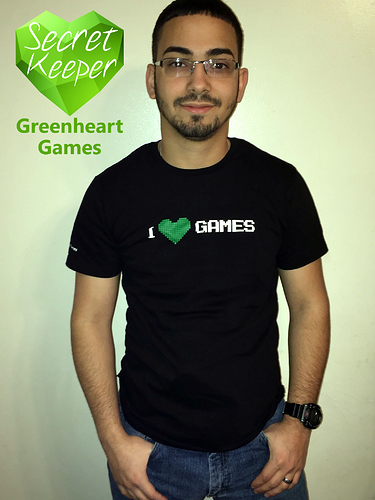 Hey everyone. A few months before the announcement of Tavern Keeper I stumbled upon a large reveal for the game. I contacted the developers and ensured them that I would keep the project a secret. After the announcement and after a long period of keeping the secret I was rewarded with some nice loot and the awesome title of “Secret Keeper” here on the Forums.

Overall I just want to take the time to thank the developers for such an awesome experience. Everyone that I interacted with at Green Heart Games handled the situation professionally while keeping a sense of humor. Green Heart Games, Thank you guys so much. I’m loving my new loot! Here I am sporting one of the awesome T-Shirts. Looking forward to playing Tavern Keeper!

Glad that the shirts arrived! We’ll have to retell the whole story at some point. We had a blast and thanks for keeping your word and not spoiling the announcement

We’ll have to retell the whole story at some point.

Yus, I must know

We’ll have to retell the whole story at some point.

Daniel Klug and Patrick Klug were brothers who had the ability to warp orange and blue bubbles out of their head for game development. These two wizards decided to make a game about their life, Game Dev Tycoon…