A Simulation of Developing Tavern Keeper

Recently, I, like many others, was thinking about Tavern Keeper.

We’re all excited to play what GHG has lined up, so I began to wonder how I would personally go about developing Tavern Keeper and whether or not I’d be successful in my endeavor.

Well, it soon became obvious what I should do: simulate my version of Tavern Keeper on Game Dev Tycoon!

The whole thing kinda is a mix of what I think it should and what it can be. While I would like it to be a huge open-world, that’s just not realistic considering that GHG is still a relatively small team, so I take stuff like that into account. 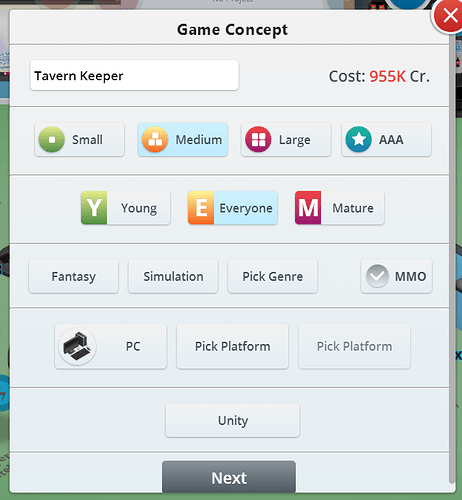 So here we are… At the (unfinished) game definition screen…

I was initially unsure what to do for the game size, but I eventually decided to be conservative and make it a Medium-sized game. The rest was pretty straight forward. 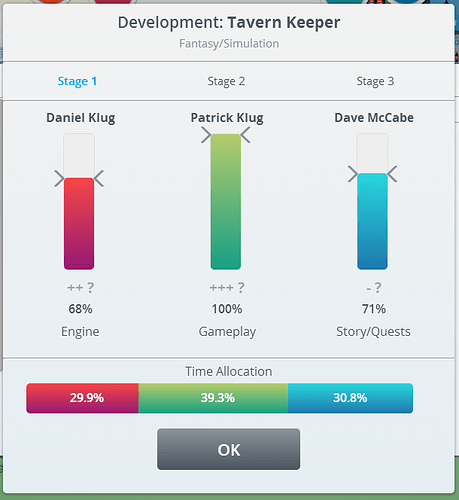 GDT might think Simulation games shouldn’t focus on Story/Quests; however, in this case, I disagree.

When it comes to a Fantasy game like Tavern Keeper, enthralling quests immediately strike me as something that needs to stick out.

I mean think about it… When talking fantasy, what’s one of the first things that comes to your mind? Quests!

Quests in Tavern Keeper don’t necessarily have to be chock full of travel adventures, but I imagine the game with interesting goals. The game doesn’t appear to be a huge open-world, but that doesn’t mean there isn’t space for some remarkable journeys.

Maybe engine should be higher, but besides that, I am pretty confident with Stage 1. 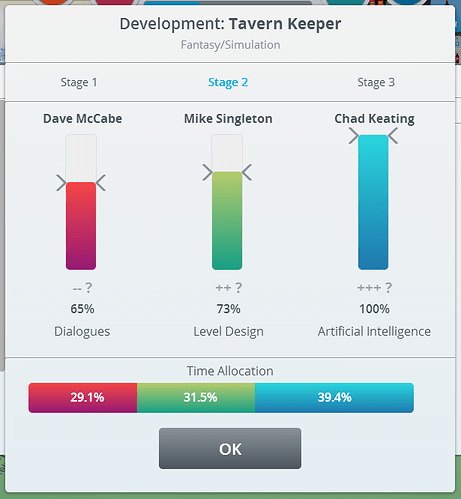 I contemplated this one for a bit. I mean, how important are Dialogues, especially in comparison to Level Design and AI?

Game Dev Tycoon believes Dialogues to be of below-average (–) importance in a Simulation, but I think it is a different story for Tavern Keeper.

One of the game’s selling points seems to be engaging dialogue (see the website), and I wholeheartedly agree with this focus.


You see me going on about Dialogues, but you may have noticed that it’s actually the lowest focus of the three.

Maybe Dialogues and Level Design should be equal, but I stand by the basic focus for each feature. 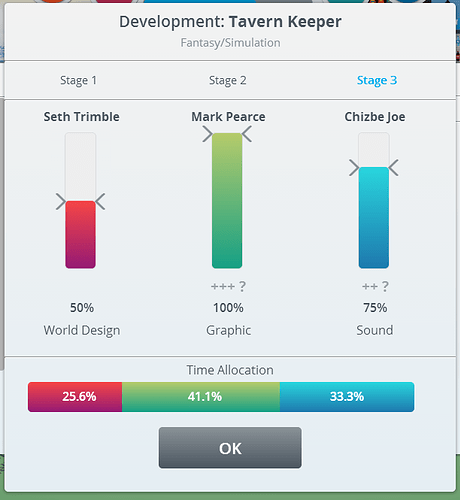 I am glad you are still reading this far… here at the end of all things… (if any of you get that reference, may god bless you)

Anyways, stage 3 was just as a difficult to decide on.

The look of this game is extremely important; it’s generally what initially attracts people to a game. So one would assume that World Design is obviously important, but I am not so sure.

Truly, it depends on your definition of “World Design.”

If Graphics weren’t a separate category/feature, then it would be a different story; however, I feel that the addition of “Graphics” as category means that World Design has to be more specific than just “the design of the world” because “world” can refer to anything and everything.

This begs the question, “Is Tavern Keeper going to be an open-world game?”

Well, my answer is no… for the most part…

While I think there is a possibility that there might be some small open-world sections between each tavern, I still believe that most of one’s time will be spent at the tavern, so that’s why World Design is in the middle.

I pretty much gave my reasoning for Graphics above: the look of the game is important to draw people in; however, I would like to say a little more on Sound.

Game Dev Tycoon definitely gets the Sound weighting spot on for Simulation games. One should be aware, though, that Sound in Tavern Keeper really needs to be superb. Considering this is a Fantasy world, I would expect it to be filled to the brim with all sorts of creatures, so unique sound for each creature is vital.

If you have a handful of very different creatures, you’re going to notice recycled, crappy sound.

Maybe World Design should be higher, but for the most part, this closely represents how I think the focus of the game should be.

So after all this talk, how did my own version of Tavern Keeper fair in the gaming world?

Well, after several test runs, I received scores ranging from 7 to 9

So there you go! Clear, irrefutable, undeniable, objective proof that my way of making Tavern Keeper is a good way.

I’ll probably add little updates/edits to this, but in the meantime, I would love to hear what you guys have to say.

can’t wait for it… keep your great job…

btw, i see there’s your name on the staff list, are you using mod or something to do that?
*just curious

Nah, that’s just my name in the game.

Does anyone have anything to say that’s related to the content and not just the TAG Mod screenshots?

Does anyone have anything to say that’s related to the content and not just the TAG Mod screenshots?

… maybe everyone loves TAG MOD, including me…

I didn’t know that totally ignoring the slider tips (differences between 10 and 30 percent are pretty big) could bring good results.

I am beginning to realize just how much of an effect the amount of design/technology points has on the score and success of a game.

That’s one of the things that bug me. If you make a AAA game, then your next game needs to be a AAA as well, or it will not do well. It’s just not realistic. Some companies make a mix of small games and huge games all the time, but GDT somewhat forces you to make your games bigger and bigger.

I get why it’s like that from a design standpoint (you want the player to progress), but it is a little annoying.

I think has to do with the fact that a game is reviewed based on your previous game.

That’s one of the things that bug me. If you make a AAA game, then your next game needs to be a AAA as well, or it will not do well. It’s just not realistic. Some companies make a mix of small games and huge games all the time, but GDT somewhat forces you to make your games bigger and bigger.

I fully agree. You really can’t go from AAA to small in GDT and expect good results and that’s definitely something we want to do different in GDT2. We are considering treating the size of the game as different markets so small games compete with small games instead of the biggest game your company ever made.

So can I make the UI for GDT2

I’ll let you know once we start on GDT2

Dang, that would be crazy @walcor