Failing at second part in the game

Hey, I love game dev tycoon and I play it alot but when I get to second stage (2.3m) all my games that I make are 1-5 and not a single one has got a better score than 5, I’ve sticked to the 2d graphics and train my employees constantly and research new topics and do games about them but they always go below 5
please help? I really want to advance in the game

Hey Leafbakko,
I’ve been playing for a lot of hours now and I have the exact same problem.
In the first part of the game, everything goes quite well and I get around 2-3m to buy an office.

Starting from then, my money just slowly decreases - I’m only hiring 1-2 people and no matter what I do, the games just don’t sell well - I mostly get scores between 7 and 9 from small sized games and scores between 3 and 5 from medium sized games, but I loose more money during development than I gain from selling them later.

I’ve struggled for several hours, even firing all staffs and trying to keep myself alive by making more smaller games - but with no money you can’t afford making a better engine and I have to watch how the scores keep on falling to the grounds and the games start to not sell at all, leaving me bankrupt.

Anyway, this game is still keeping me quite entertained and I’m going to look for improvements

I’ve found going slow in the beginning the best tactic.

Don’t leave the garage without 4 million

Hire 1, then 2 employees once you get some medium games going

Stay with an advanced 2D engine, no need to go to 3D as soon as you can.

Well TechAndrew has a point although that not really my own playing style I try to focus on creating the games, cash never seems to be a problem try thinking about what games you pick the platform, and the stats you put into the game.

You may want to take a look at the wiki they have a lot of good info to help you.

Stick with the “PC” platform for a while, and you should do well.

I myself have a lot of problems starting out, and don’t even make it withing the first 20-50 minutes. So I gave the PC platform a go and I was able to play for much longer.

However, the game is just to harsh on me, I would make games with scores of 2-4 and just plummet from there. I have “Yet” to get another office of get anywhere because I just lose so much at the start.

The amount I pay to my staff is way to much I think.

Thanks guys, I didn’t move to the new office after getting the money and I got 2 9.75 games in a row! 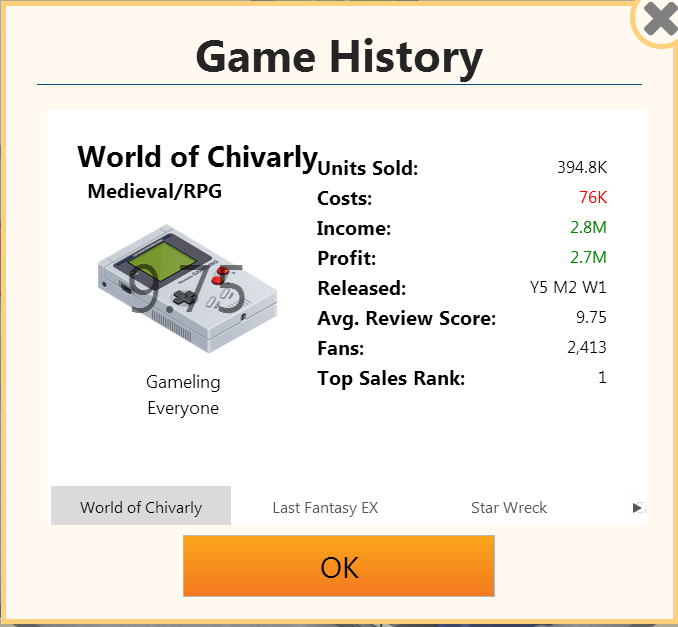 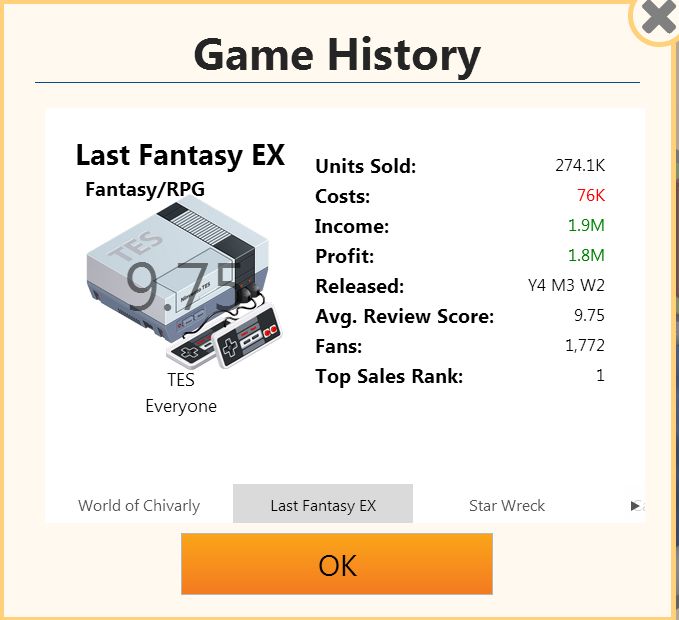 !
After reading several threads on the forum, I came across this post and it helped me A LOT:

I see that a lot of players have trouble getting started in level2. Here are some tips (if you like a challenge then maybe don’t read them): Medium games work best if you have a team of 3, so your aim should be to get to 2 additional workers. any more is overkill for medium games. Staff members are expensive in GDT. Be very careful what publishing contracts you take. Publishers often suggest rubbish combinations or a platform/audience mix that isn’t too good. If you have trouble thinking of wh…

I’m finally getting further in the game and if you are also stuck try the following:

And finally create medium games over a publisher to increase your fan base - don’t be afraid if your first game gets a bad score, just heads up and continue with the next medium one and never fall back to small games, small games worked good in the garage but they struggle you to bankrupt in the office.

This table(s) here helped me a lot getting good scores:

Last but not least, don’t forget that you can save/load at any time in the game :wink2:

Good luck to everyone who is having problems, I hope my post helped you a little

The way I did it was:

This worked quiet well for me.

My best advice is to never, ever, ever, ever put absolutely everything you got into making a game at any point, unless you are absolutely sure you can then innovate (increase tech level, more features, etc.). The reason is simple.

Imagine if someone on an NES game in the 80’s managed to make an NES with a great story, great gameplay and used amazing tech. The game then scores amazingly and goes to sell millions.

The next game they release BETTER LIVE UP TO IT. And in this game, every review from a game is done by comparing it to your best game.

Aim to only make 7s, 8s or 9s. If you do things slightly better every time, the game will award you consistently good reviews (oh, and if you manage to make a 10/10/10/9 game in your garage by this method, it’s your third good game, but don’t go crazy and don’t get disappointed if your next game is 8/7/8/9 or something; it’s still possibly your best game score!).

If you make an engine with everything, and put it all into one game, that game is likely to score well, but then you’ll have a hard time getting good reviews consistently because everything will be compared to your best game.

The key to success is to innovate at a comfortable pace. First, just make an engine with savegames, 2d graphics level 2, maybe controller, better AI and maybe something else (BTW, try not to do this until year 4). Then STOP. Make a game with the new graphics, but don’t add any of the other features yet. Then in the next game, add ONE of the new engine features, and keep researching for the next engine. Meanwhile, keep making games preferably with the same genre (make sure you alternate good topics with the same genre), and keep adding the new features one by one. If your sliders are set properly for the game, then you should be getting 8+ games pretty consistently. Don’t be afraid to adjust the sliders slightly when releasing a game, but make sure that if you do, try to not add or remove engine features, so you can directly see the benefit/problem with the new slider settings. Also, don’t move into the new office until you have about 4-5M so you can hire two people at once and have no monetary problems. Don’t forget to do the intro training, then train them between games.

Also, don’t be afraid to release two games in a row of the same genre (different topics or you’ll get terrible reviews!) with the same sliders and features. You might get a slightly better or worse result, but hey if you have nothing lese to do, go ahead. If you’re keeping the same features, try ting around with the sliders a TINY BIT, and hopefully only one at a time, then pay attention to the end result.

This is a really long and very boring playthrough (I’m not very entertaining) but it shows some of those points. Also, feel free follow the same path I did until you get to publishing your own medium games if you want!

Hope you have fun!

Going slow or fast is not the problem. You just have to play right.

The wiki provides all the mechanics you need to know. I dunno if it’s all 100% right or not, but it’s close enough such that with a little bit of experimentation you should be able to figure out how to do well.

With a bit of experimentation, you should typically hit 100k fans well before 8y. From there on you can basically do whatever you want. At this point I go to 4 employees and start specing towards my end goal. You should be ready to open R&D lab pretty much immediately after hitting office 3.

I finished the game now.